Portland, Oregon (13, April 2019) – The drivers of Porsche Trophy West USA took to the wet turns of Portland International Raceway today for Race 3, Round 2 of the 2019 season.

The colorful liveries of the Porsche Trophy West USA cars sharply contrasted the dark rain clouds today and were clearly visible as the drivers raced their Porsche GT3 and GT4 machines through the green terrain of Portland International Raceway. Preston Calvert, Jim Walsh, Erin Vogel, Andy Wilzoch, and Martin Brauns overcame the wet weather of the Pacific Northwest and took first in their classes.

Group 2 led the way in the rain and set the tone for the rest of the cars to follow. The track was slippery, and the rooster tails were high as the drivers challenged one another. Emerald Class driver Martin Brauns coped with the rain and the challenge of learning a new track.

“I’m happy to be here. It’s my first time up here,” said Brauns. “To learn a new track in the rain is challenging. I had three spins that were thankfully uneventful, but I’m looking forward to assimilating what I learned today and getting back out there.”

“I haven’t had a lot of experience in the rain,” said Vogel. “Usually when I do, I stick with the slicks and ride it out. Having the option of the rain tires required a bit more strategy than I’ve had to use in the past. Continuing to learn in the rain has been a great experience.”

Group 1 followed their predecessors into the rain and had their own lively dance with mother nature. The conditions of the day required the drivers to not only compete with the competitors in their class but also with their ability to maneuver smoothly on a wet track. Preston Calvert showed off his driving skills as he overcame difficult circumstances and won after making contact with the wall.

“I had a good starting position and was able to pass Hutton McKenna early in the race after he went a bit sideways,” said Calvert. “Once I had the lead, I just put my head down and tried to drive consistently. I locked up going into the back straight and scraped along the wall, but fortunately, I was able to continue and win the race.”

Jim Slavik, Scott Daiger, Stephen Ayers, and Jim Walsh of the Platinum Masters Class proved today that they are in fact masters of the craft. After a slippery race overall, Jim Walsh took first in class and raised his trophy on the podium.

“The main strategy today was to bring the car home in one piece,” said Walsh. “It was tough to get temperature into the tires. I just tried to hold it together and come home and finish. I think I spun less than the other guys in the class.”

The first day of Round 2 was a thrilling start to the weekend that had Competent Motorsport’s President, Greg Franz on the edge of his seat. “We’re very pleased with how things turned out considering the weather conditions we had today,” said Franz. The drivers had a lot of fun, and it was kind of like a race that nobody wanted to win. The drivers did a great job, and we’re all very excited about what we’ve got going on tomorrow.” 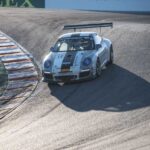 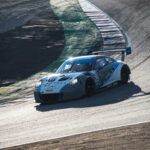 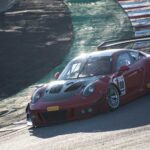 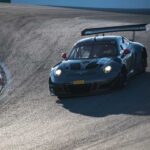 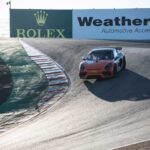